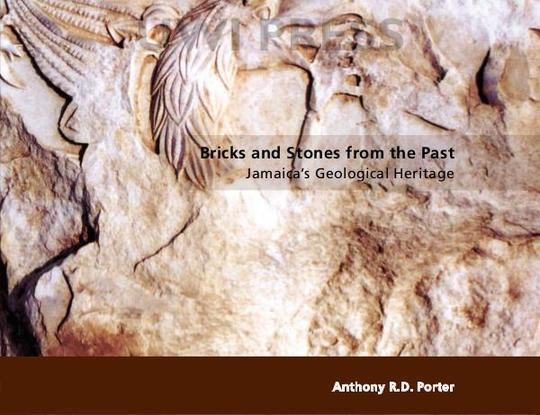 Bricks and Stones From the Past: Jamaica's Geological Heritage

By Anthony R. D. Porter
US$ 9.99
Buy eBook NowGift eBook
The publisher has enabled DRM protection, which means that you need to use the BookFusion iOS, Android or Web app to read this eBook. This eBook cannot be used outside of the BookFusion platform.
DescriptionTable of ContentsReviewsComments
Book Description

JAMAICA HAS long been known as the land of wood and water, but after reading through Anthony R.D. Porter's Bricks and Stones From The Past, Jamaica's Geological Heritage, it is clear that 'stone' should have been included.

The layman must be warned, though, that this expansion on the familiar is a hardy tale, not only in the sense of its subject matter and also the author's persistence that is revealed in the close to 100 pages, but in the language. The initiated would, of course, have no problem.

And while the objects he describes with a detailing that shows not only extensive and impressive knowledge of his subject area, but also a burning passion are of course the main course, one reads with the awareness that this man has travelled not only the physical Jamaica, but also the continuum of time the country inhabits.

However, despite Porter's passion and the overarching sense of history, Bricks and Stones From the Past is not a book for the reader looking for an engaging tale. This one is best read by those with at least a rudimentary knowledge of the field, what with descriptions like 'the oolitic texture' and scientifically expressed measurements of hardness such as "jadeite is harder (H=6.5 to 7) and denser (SG=3.2 to 3.5) than nephrite (H=5 to 6; SG = 3.0 to 3.1)".

However, if someone outside the field is willing to wade through or skip over the language which the exploration geologist uses (and the glossary does help significantly) as a matter of necessity, they will find that his dedication is fitting.

Porter dedicates Bricks and Stones "to the memory of our ancestors - black, brown and white; free men and women, indentured servants and slaves; skilled artisans and merchants, sailors and soldiers, and others - who were responsible for the production of the objects and structures described in this book. Let us honour your sacrifices by preserving them for future generations".

Porter does those ancestors fitting homage in a high-quality glossy paper book, filled with images, which looks at specific areas such as Port Royal and Fort Augusta, from the Pre-Columbian era to present. And along the way he tells the tales of those who made or introduced the bricks and stones into Jamaica. The Star of David Bricks, which earn their own chapter, are a wonderful example.

They were made by a Portuguese bricklayer named Guitterez, who was living in St Jago de la Vega when the British captured Jamaica. He was a 'Marana', a Jew in secret, while practising another faith openly. He was employed to make gunnery bricks, but "as a rebellious, deeply religious Jew, Guitterez defiantly immortalised his religion by moulding the Star of David into each brick ... "

A tale of hardy resistance indeed.

From the Tainos and their greenstone through the colonisers and their bricks and even railway lines, Porter embraces all. And in 'Other Stone Artefacts and Objects' he demonstrates that size does not matter, giving beads and gunflints pride of place.

And although Bricks and Stones From The Past, Jamaica's Geological Heritageis a historical text, Porter writes with a careful eye towards the future, realising full well that the hard objects he describes in such intricate detail are not necessarily permanent.

And in the end one has to agree; they are well worth preserving.