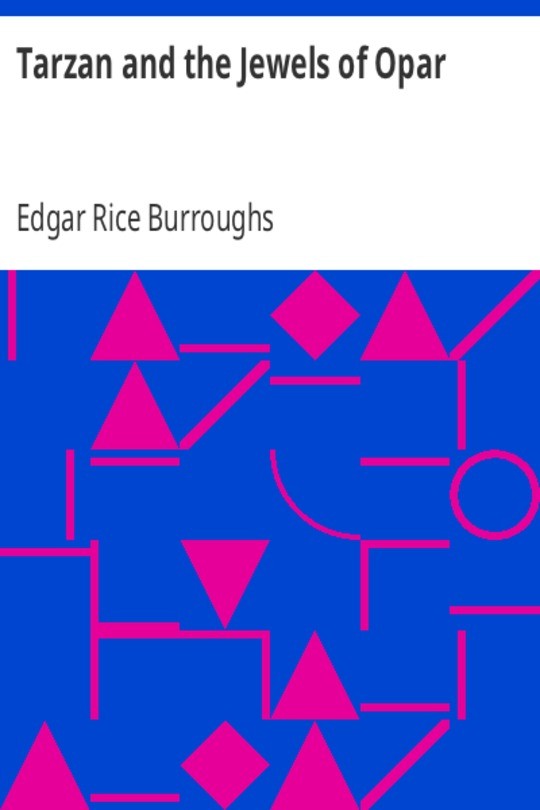 The woman rushed forward and seized the ape-man's hands in hers. "Do not leave me!" she cried. "Stay, and you shall be High Priest. La loves you. All Opar shall be yours. Slaves shall wait upon you. Stay, Tarzan of the Apes, and let love reward you." The ape-man pushed the kneeling woman aside. "Tarzan does not desire you," he said, simply, and stepping to Werper's side he cut the Belgian's bonds and motioned him to follow. Panting--her face convulsed with rage, La sprang to her feet. "Stay, you shall!" she screamed. "La will have you--if she cannot have you alive, she will have you dead.,." ~~~ Edgar Rice Burroughs created one of the most iconic figures in American pop culture, Tarzan of the Apes, and it is impossible to overstate his influence on entire genres of popular literature in the decades after his enormously winning pulp novels stormed the public's imagination. Tarzan the Jewels of Opar, first published in 1918, is the fifth installment in Burroughs' tales of the ape-man, and is considered by devotees to be one of the best. Here, Tarzan journeys to the gold-mining city of Opar, steeped in myth and legend, to contend with greedy villains and the amorous attentions of La, the High Priestess of the Flaming God. American novelist EDGAR RICE BURROUGHS (1875-1950) wrote dozens of adventure, crime, and science fiction novels that are still beloved today, including Tarzan of the Apes (1912), At the Earth's Core (1914), A Princess of Mars (1917), The Land That Time Forgot (1924), and Pirates of Venus (1934). He is reputed to have been reading a comic book when he died.