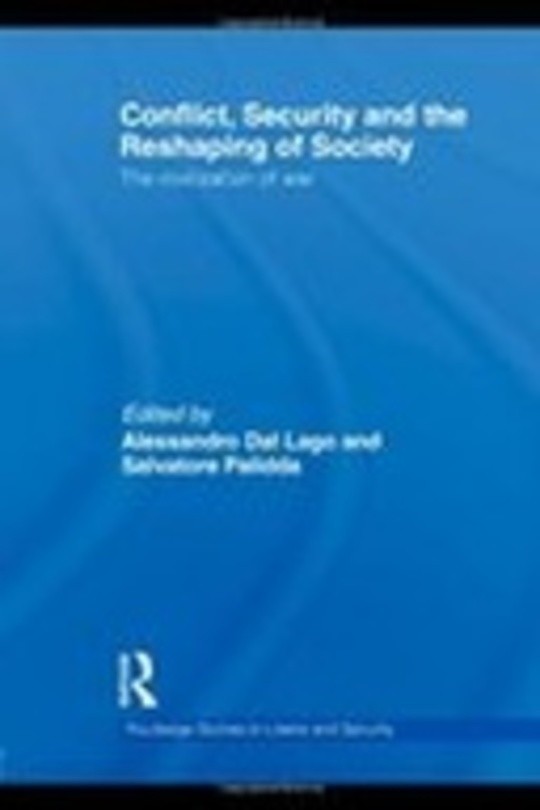 Conflict, Security and the Reshaping of Society

This book is an examination of the effect of contemporary wars (such as the 'War on Terror') on civil life at a global level. Contemporary literature on war is mainly devoted to recent changes in the theory and practice of warfare, particular those in which terrorists or insurgents are involved (for example, the 'revolution in military affairs', 'small wars', and so on). On the other hand, today's research on security is focused, among other themes, on the effects of the war on terrorism, and on civil liberties and social control. This volume connects these two fields of research, showing how 'war' and 'security' tend to exchange targets and forms of action as well as personnel (for instance, the spreading use of private contractors in wars and of military experts in the 'struggle for security') in modern society. This shows how, contrary to Clausewitz's belief war should be conceived of as a "continuation of politics by other means", the opposite statement is also true: that politics, insofar as it concerns security, can be defined as the 'continuation of war by other means'. This book will be of much interest to students of critical security studies, war and conflict studies, terrorism studies, sociology and IR in general. Salvatore Palidda is Professor of Sociology in the Faculty of Education at the University of Genoa. Alessandro Dal Lago is Professor of Sociology of Culture and Communication at the University of Genoa.Introduction Alessandro Dal Lago and Salvatore Palidda Part 1: The Constituent Role of Armed Conflicts 1. Fields Without Honour: Contemporary War as Global Enforcement Alessandro Dal Lago 2. The Barbarization of the Peace: The Neo-Conservative Transformation of War and Perspectives Alain Joxe 3. Norm/Exception: Exceptionalism and Governmental Prospects Roberto Ciccarelli 4. Reversing Clausewitz? War and politics in French Philosophy: Michel Foucault, Deleuze-Guattari and Raymond Aron Massimiliano Guareschi 5. Global War and Technoscience Luca Guzzetti Part 2: Securisation 6. September 14, 2001: The Regression to the Habitus Didier Bigo 7. Revolution in Police Affairs Salvatore Palidda 8. Surveillance: From Resistance to Support Eric Heilmann 9. Enemies, Not Criminals: The Law and Courts Against Global Terrorism Gabriella Petti Part 3: The Reshaping of Global Society 10. Media at War Marcello Maneri 11. Global Bureaucracy: Irresponsible But Not Indifferent Mariella Pandolfi and Laurence Mcfall 12. The Space of Camps: Towards a Genealogy of Places of Internment in the Present Federico Rahola