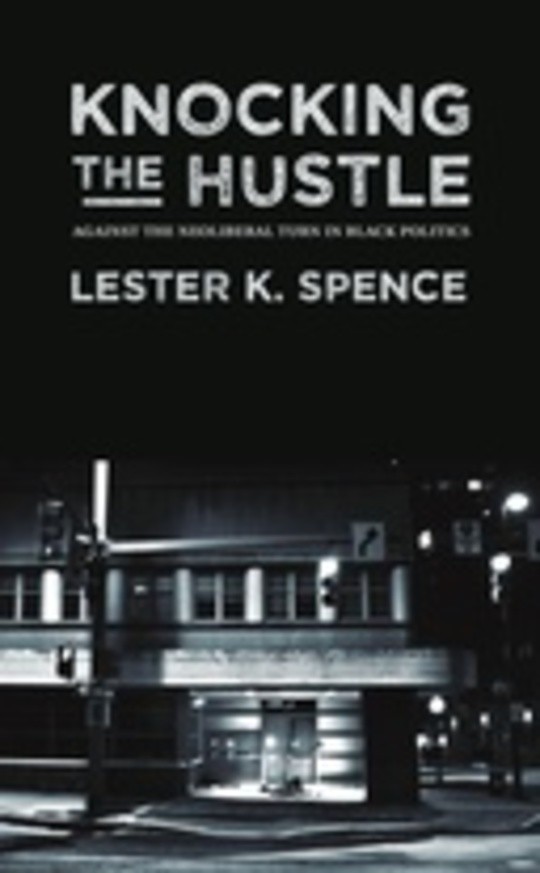 Knocking the Hustle: Against the Neoliberal Turn in Black Politics

Over the past several years scholars, activists, and analysts have begun to examine the growing divide between the wealthy and the rest of us, suggesting that the divide can be traced to the neoliberal turn. “I’m not a business man; I’m a business, man.” Perhaps no better statement gets at the heart of this turn. Increasingly we’re being forced to think of ourselves in entrepreneurial terms, forced to take more and more responsibility for developing our “human capital.” Furthermore a range of institutions from churches to schools to entire cities have been remade, restructured to in order to perform like businesses. Finally, even political concepts like freedom, and democracy have been significantly altered. As a result we face higher levels of inequality than any other time over the last century.

In  Knocking the Hustle: Against the Neoliberal Turn in Black Politics, Lester K. Spence writes the first book length effort to chart the effects of this transformation on African American communities, in an attempt to revitalize the black political imagination. Rather than asking black men and women to “hustle harder” Spence criticizes the act of hustling itself as a tactic used to demobilize and disempower the communities most in need of empowerment.

The story I began this with is not a life or death story. But it is a story about a certain type of suffering, a masked suffering, that even when healed is done so problematically, “problematically” because the various ways we (and here I not only refer to African Americans but to Americans in general) tend to heal this suffering are woefully inadequate, in part because we haven’t properly identified what causes our suffering in the first place. The crises my family faced are the natural end-products of a society that increasingly shirks its responsibilities to those perceived to be losers in an increasingly stark competition over material, social, and psychic resources….For a variety of reasons we’ve been forced to hustle and grind our way out of the post-civil rights era, and it is this hustle and grind in all of its institutional manifestations that’s resulted in our current condition. While interest in neoliberalism is growing, writings that examine how neoliberalism shapes black life are few and far between. I rectify this gap with an eye towards contributing to the scholarly literature but more importantly with an eye towards contributing to the broader conversation about solutions.


Support this book by subscribing to Punctum Books.