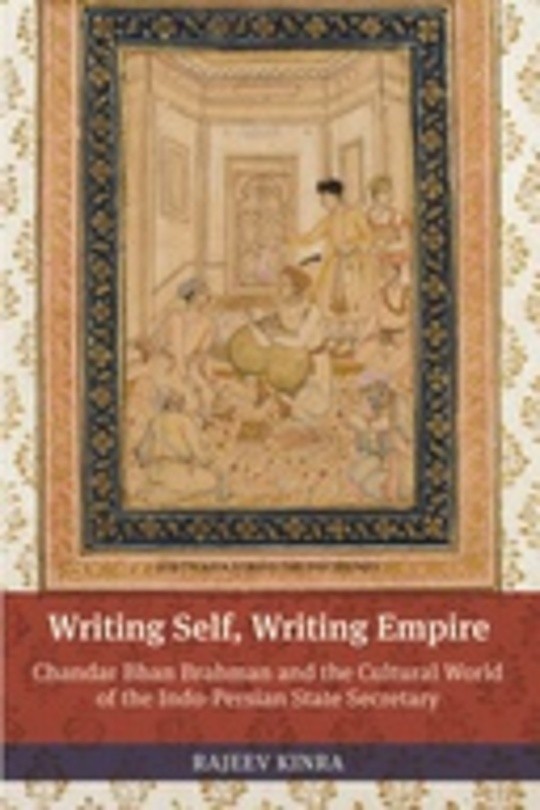 Writing Self, Writing Empire: Chandar Bhan Brahman and the Cultural World of the Indo-Persian State Secretary

Writing Self, Writing Empire examines the life, career, and writings of the Mughal state secretary, or munshi, Chandar Bhan Brahman (d. ca. 1670), one of the great Indo-Persian poets and prose stylists of early modern South Asia. Chandar Bhan’s life spanned the reigns of four emperors: Akbar (1556–1605), Jahangir (1605–1627), Shah Jahan (1628–1658), and Aurangzeb ‘Alamgir (1658–1707), the last of the “Great Mughals” whose courts dominated the culture and politics of the subcontinent at the height of the empire’s power, territorial reach, and global influence.

Chandar Bhan was a high-caste Hindu who worked for a series of Muslim monarchs and other officials, forming powerful friendships along the way; his experience bears vivid testimony to the pluralistic atmosphere of the Mughal court, particularly during the reign of Shah Jahan, the celebrated builder of the Taj Mahal. But his widely circulated and emulated works also touch on a range of topics central to our understanding of the court’s literary, mystical, administrative, and ethical cultures, while his letters and autobiographical writings provide tantalizing examples of early modern Indo-Persian modes of self-fashioning. Chandar Bhan’s oeuvre is a valuable window onto a crucial, though surprisingly neglected, period of Mughal cultural and political history.

“Adds significant depth to our understanding of the intellectual and cultural atmosphere of the Mughal court at its height.” RICHARD M. EATON, author of A Social History of the Deccan, 1300–1761

“The fullest study so far of the understudied phenomenon of Hindu writers of Persian. Through the prism of Chandar Bhan’s writings, Rajeev Kinra presents a holistic treatment of the cultural concerns of the Mughal empire’s Hindu ‘men of the pen.’” NILE GREEN, author of Making Space: Sufis and Settlers in Early Modern India

RAJEEV KINRA is Assistant Professor in the Department of History at Northwestern
University.