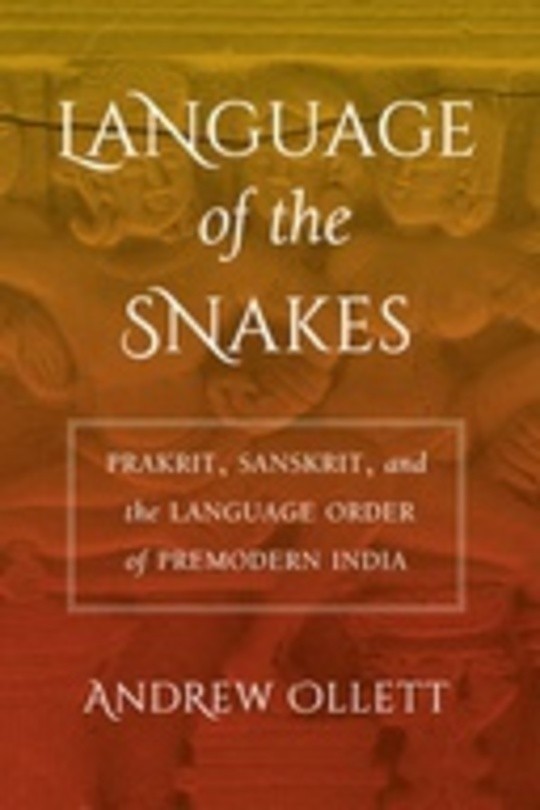 Language of the Snakes

Language of the Snakes traces the history of the Prakrit language as a literary phenomenon, starting from its cultivation in courts of the Deccan in the first centuries of the common era. Although little studied today, Prakrit was an important vector of the kāvya movement and once joined Sanskrit at the apex of classical Indian literary culture. The opposition between Prakrit and Sanskrit was at the center of an enduring “language order” in India, a set of ways of thinking about, naming, classifying, representing, and ultimately using languages. As a language of classical literature that nevertheless retained its associations with more demotic language practices, Prakrit both embodies major cultural tensions—between high and low, transregional and regional, cosmopolitan and vernacular—and provides a unique perspective onto the history of literature and culture in South Asia.

“Andrew Ollett’s book is one of those scholarly breakthroughs that happen, with luck, once or twice in a generation. It reveals the richness of Prakrit language and literary modes with a precision and depth of insight never seen before.” DAVID SHULMAN, Professor Emeritus, Hebrew University

“Ollett offers a brilliant, original, and thoroughly engaging investigation of the complex language order of premodern India. Bringing to the fore the less-studied role of the literary Prakrits, his work makes a major contribution to our understanding of the history of language and literature in early India and beyond.” R. P. GOLDMAN, Catherine and William L. Magistretti Distinguished Professor in Sanskrit and India Studies, University of California, Berkeley

ANDREW OLLETT works on the literary and intellectual traditions of premodern India.