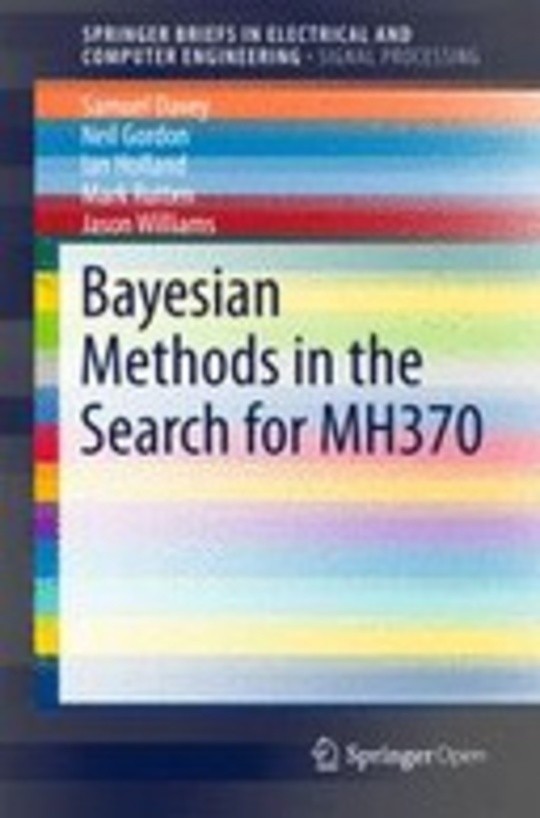 Bayesian Methods in the Search for MH370

On 7 March 2014 at 16:42,1 Malaysian Airlines flight MH370 departed from Kuala Lumpur (KL) International Airport bound for Beijing. There was a total of 239 persons on board (227 passengers and 12 crew). The aircraft lost contact with Air Traffic Control (ATC) during a transition between Malaysian and Vietnamese airspace. Over the following days, an intensive air and sea rescue search was made around the last reported position of the aircraft in the Gulf of Thailand without success. It then became clear that satellite communication messages between the aircraft and one member of Inmarsat’s constellation of geosynchronous satellites were crucial to defining the search zone for the aircraft.

Inmarsat conducted a rapid and innovative analysis of the data which placed the aircraft in the Australian search and rescue zone on an arc in the Southern part of the Indian Ocean. On 17 March 2014, the Australian Maritime Safety Authority took responsibility of the search and rescue operation. Subsequently the Joint Agency Coordination Centre (JACC) was established on 30 March 2014 to coordinate the Australian Government’s support for the search and over the following weeks an intensive aerial and surface search was conducted by an international team.

In this book we detail the statistical approach adopted by the DST Group team to analyse the available data and produce a probability density function (pdf) of the accident aircraft’s final location. Being statistical in nature, this book seeks to identify aircraft paths that are most likely, given models which incorporate sensor measurements, commonly observed commercial aircraft motion, and air transport safety investigator and manufacturer expert advice and assessments. The goal is not to identify the complete and exhaustive set of all possible aircraft paths, but rather the subset of those trajectories that are most probable. The area covered by the set of end-points of all possible paths is prohibitively large and the overwhelming majority of this area contains vanishingly small probability. In determining how to allocate finite search resources, priority is directed to the area containing the highest probability trajectories. The proposed method incorporates a rich variety of possible paths, and calculates a probability distribution based on the well-established, rigorous Bayesian toolkit, which automatically trades the complexity of the model against the match to the observed measurements.