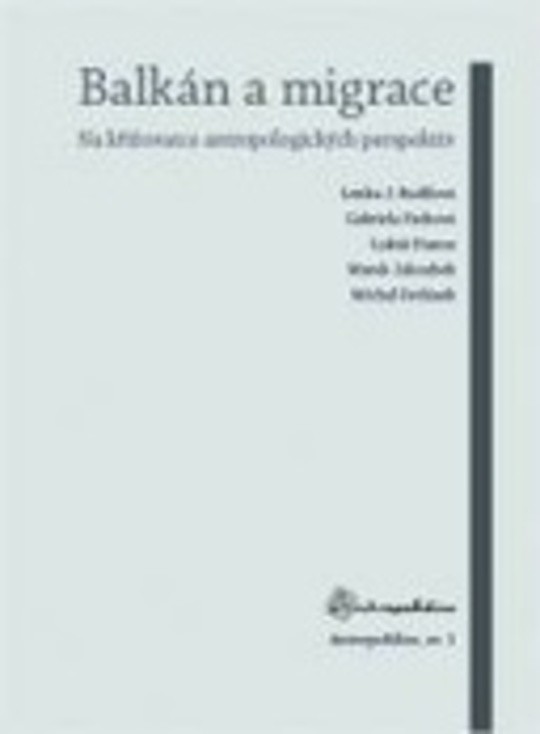 The collective monograph Balkans and migration includes five chapters written by anthropologically oriented researchers (L. Budilová, G. Fatková, L. Hanus, M. Jakoubek, M. Pavlásek) practicing a long-term research in the Balkan territory. In addition to general parameters of anthropological optics and an anthropological field research in the Balkans those particular studies are connected by study transversal theme of migration. While, however, the Balkans and anthropology in the publication are invariant framework guaranteeing the unity of the whole volume, the migration represent in this respect the constant variable. The given phenomenon is studied in case of various groups (Bulgarian and Romanian Czechs, Karakachans), and we can observe some aspects of its heterogeneous nature (post-war migration within the re-emigrant interstate agreements, seasonal labor migration, migration of farmers for the land, leaving the homeland because of religious disputes, etc.). The ambition of the monograph is to justify the relevance to attend to the fieldwork based research in the Balkans, and show why the new generation of anthropologists and other social scientists, practitioners, should pay their professional attention to the Balkan peninsula. Although Western anthropologists have been already focused on the Balkans for few decades, in Czech environment was this theme ignored by anthropologists and ethnographers. They yielded this interest to the political scientists, historians, travelers, and television reporters. This monograph is going to rectify this situation by a series of analyses applying different perspectives of the research. Those analyses are based on the interpretation of ethnographic data collected during the long-term field research. The Balkan peninsula and this terrain inhabiting populations are presented as a stimulating field for Czech anthropological researchers. An attractive topic reflected in those five chapters is the Czech expatriate presence in the Balkans. Until the present time there live several enclaves of Czech compatriots, who actively claim their Czech origin. Those enclaves adapt dynamically to the global political and economic changes. Not only the authors of this monograph have noticed that the science paradigm in the second half of the twentieth century, which is based on a priori national categorization, is not able to capture new social and cultural formations of minority groups living outside their „homeland“. An attempt to overcome the nationalistic classification of Czech (e) migration could be applied and grounded in many identification strategies taking place in the distant past. It seems that the time has come to revise the still dominant scientific approaches to expatriate minorities and expand their attention to the dimensions of collective life reflecting the changes in the last twenty years. The transformation of strategies of Czech expatriate minorities in topologically, economically and politically open Europe (hence the global environment) is a useful platform, where certain phenomena can be observed. Those phenomena produce inspiring issues of sustainability and transformation of collective identities in the contemporary world. Certain marginality of the region including more difficulties in accessibility of resources force the marginal populations to adapt to difficult conditions. These minorities are a good example for monitoring the development of organic solidarity patterns (in Durkheim sense) into more complex social structures, often „aside“ all scientific concepts of collective identification.