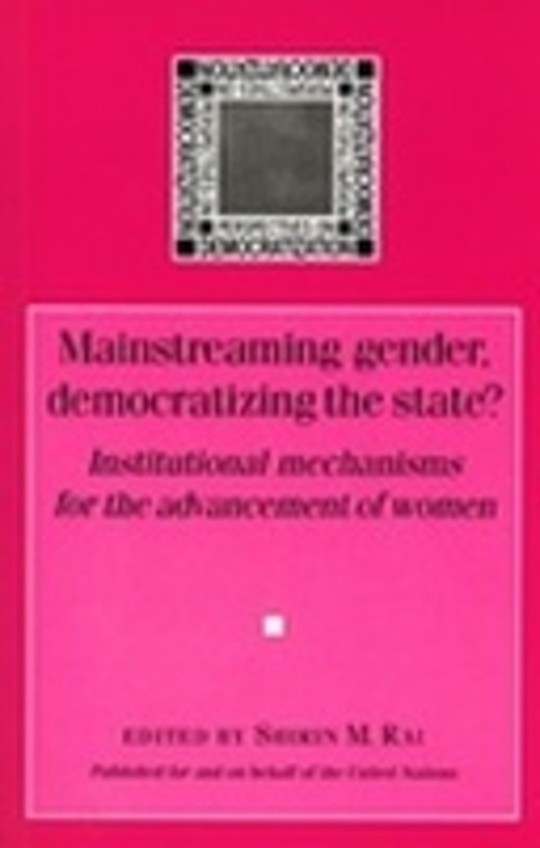 Democratization has become an important concept in the last ten years. With the end of the Cold War, the spread of globalization, and the extension of economic regulatory regimes, democratization has come to be seen as important to securing long-term political stability. Much has been written about democratization and gender in works on human rights, citizenship, women's movements and challenges to authoritarian regimes. This book, published in association with the United Nations, builds on this existing body of literature by looking at the relevance of national machineries for the advancement of women. Appropriate mechanisms through which the mainstreaming of gender can take place are considered, and the levels of governance involved - the relationship between gender mainstreaming and state structures, and the effect of this relationship on issues of decentralization, accountability, consultation and participation. It defines what the 'interests of women' are, and how and by what processes these interests are represented to the state policy making structures. Global strategies for the advancement of women, and how far these have penetrated at national level are considered. This is illuminated by a series of case studies - gender equality in Sweden and other Nordic countries, the Ugandan ministry of Gender, Culture and Social services, gender awareness in Central and Eastern Europe, and further examples from South Korea, the Lebanon, Beijing and Australia. This book will be of vital use to students of democratization, gender studies and politics, and is the first full-length appraisal of global strategies and national machineries for the advancement of women.

Table of Contents
You May Also Like
Free
Frederick William Maitland Downing Professor of the Laws of England; A Biographical Sketch
By H. A. L. (Herbert Albert Laurens) Fisher

Free
Sociology: Understanding and Changing the Social World
By [Author removed at request of original publisher]
Also Available On