Lying on the border between eastern and western Christendom, Orthodox Karelia preserved its unique religious culture into the 19th and 20th centuries, when it was described and recorded by Finnish and Karelian folklore collectors. This colorful array of ritulas and beliefs involving nature spirits, saints, the dead, and pilgrimage to monasteries represented a unigue fusion of official Church ritual and doctrine and pre-Christian ethnic folk belief. This book undertakes a fascinating exploration into many aspects of Orthodox Karelian ritual life: beliefs in supernatural forces, folk models of illness, body concepts, divination, holy icons, the role of the ritual specialist and healer, the divide between nature and culture, images of forest, the cult of the dead, and the popular image of monasteries and holy hermits. It will appeal to anyone interested in popular religion, the cognitive study of religion, ritual studies, medical anthropology, and the folk traditions and symbolism of the Balto-Finnic peoples.

This book is part of the Studia Fennica Folkloristica series. 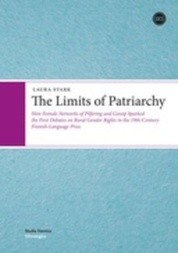 Free
The Limits of Patriarchy
By Laura Stark
Also Available On