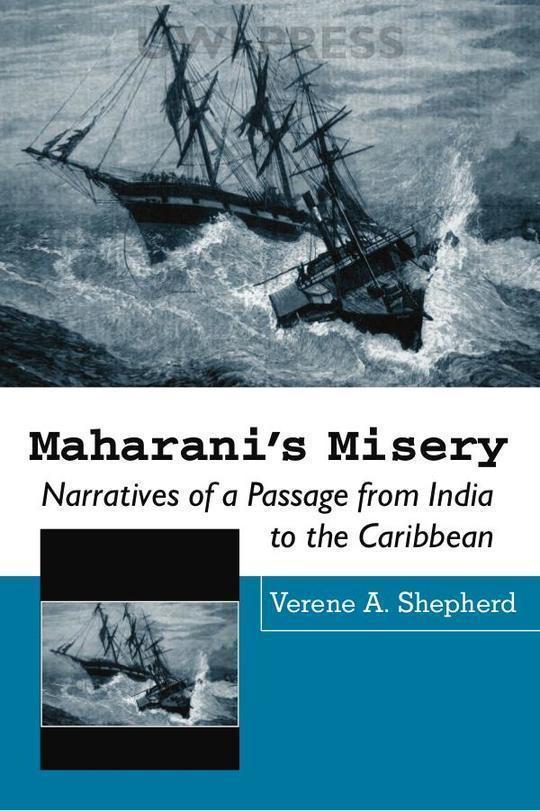 Maharini's Misery: Narratives of a Passage From India to the Caribbean

By Verene Shepard, Verene A Shepherd
US$ 9.99
Buy eBook NowGift eBook
The publisher has enabled DRM protection, which means that you need to use the BookFusion iOS, Android or Web app to read this eBook. This eBook cannot be used outside of the BookFusion platform.
DescriptionTable of ContentsReviews
Book Description

Maharani's Misery is a documentary study of a particular woman labourer on her way from Calcutta to Guyana in 1885. The author says this book is an effort to contribute to the excavation of gender-differentiated data of the indenture experience, and of "the exercise of social power and authority, through the medium of socio-sexual manipulation, by empowered males over less empowered women."

The backbone details are clear: a ship, Allanshaw, set out from Calcutta on July 24, 1885 from Calcutta with 660 indentured labourers and 41 crew members, and reached its destination -- British Guyana -- 102 days later, on 6 November, 1885. During the voyage, there were 17 deaths, one of which was the problematic death of Maharani on the 27th of September. The ship's doctor had declared that she had suffered "inflammation near the womb" and peritonitis. Ipson, a black crewman, was charged with rape and went on trial in Georgetown as soon as the ship landed. The book includes 26 depositions given by various passengers and crew and officers on board the ship. There were no satisfactory answers at the end of the month-long inquiry in 1885, and there are none as one comes to the end of this book. The author admits there are far more questions than answers, but, using appropriate critical terms and concepts from subaltern and feminist studies also concludes that all this data shows incipient gender inequities and race injustices.

The witness-depositions can be read any way one pleases. At the end, the documentary does not strongly support the author's position of white domination and privilege slanting the issue to their advantage, but does give enough open-ended secondary critical speculations to argue towards that view. Witness depositions from the lower level of crew members imply that the upper level sexually used women passengers, and the officers' depositions consistently speak of the high level morality at all levels. One could extrapolate that the black man accused of rape was himself a scapegoat, but even those who speak in his favour say he was not to be trusted, was a braggart and boasted about his prowess with women.

However, what fascinates me are the charts that present irrefutable facts and give a glimpse of the experiences of the first diasporic movement from India, and the deep contrasts between the first movement and our own diasporic experience of the last fifty years. The reader learns a lot about the first diasporic movement from India across the Atlantic, that took started soon after slave trade was abolished. In seeking for cheap labour, the British flung their net across the empire, and transported people from the subcontinent to various other countries, including the Caribbean and Fiji.

(For the Fijian experience I would refer those interested to two Indo-Fijian writers, Subramani and Vijay Mishra, each of whom published a significant volume for the centenary of the girmit experience in Fiji, in 1979. Mishra's title, Rama's Banishment, has become an interesting reference point for diaspora studies. The deal was that the labourers signed an "agreement" (the word became abridged to girmit) that they would be given board and food and a basic salary for five years. At the end of it, they could either return to India or sign up for another five years in order to save some money or get some privileges such as buying land. Many opted to stay another stint, which kept getting extended.)

It was the same with indentured labourers in the Caribbean.

We learn much about that experience. Even the basic facts are fascinating -- that a million individuals were taken from India to the Caribbean between 1838 and 1917, that women started leaving only about thirty years after the men, that the ratio of men to women was often 2:1 on Guyana-bound ships and 3:1 in Trinidad-bound ships, and that in the early decades there were hardly any women; that on each ship, there were returning emigrants, people who were visiting their families in India and now going back to the islands. 11 of those who died on this voyage died of cerebro-spinal fever, and the ratio of 17 deaths among 700 people was not abnormal. We learn the dimensions of the space allowed to the passengers, and that the distance between the women's toilet, outside which Maharani was raped, and the hospital door was six feet, and the distance between the sentry's post and the toilet was 20 feet.

We learn about the on-the-spot dispensation of punishment on board, how a young crewman was punished for insubordination and had to walk back and forth carrying a capstan bar, and how returning women-passengers, who knew some English, had a good rapport with the officers and enjoyed certain benefits.

There are all kinds of tidbits of information in this book: of the problems of transporting people of different religions in a restricted space; of how Muslims once refused to eat food cooked by a Hindu cook and rose in rebellion ; of how cooks were selected from the highest possible caste so as not to offend the Hindu caste-hierarchy; how "sirdars" were appointed to be sentries as it were, one sirdar for 25 passengers; that only after 1860 were husband and wife allowed to share a berth. Notwithstanding all the rules and regulations for the care of the passengers, given human behaviour and sexuality, it is likely that many women were victims of violence and exploitation.

For an outsider, these are interesting details that give one a sense of life as lived. For an insider, such as the authors of such books, each of the details could be a harrowing experience of reconstructing the lives of those, from India and Africa, on whose backs the British built their empire.