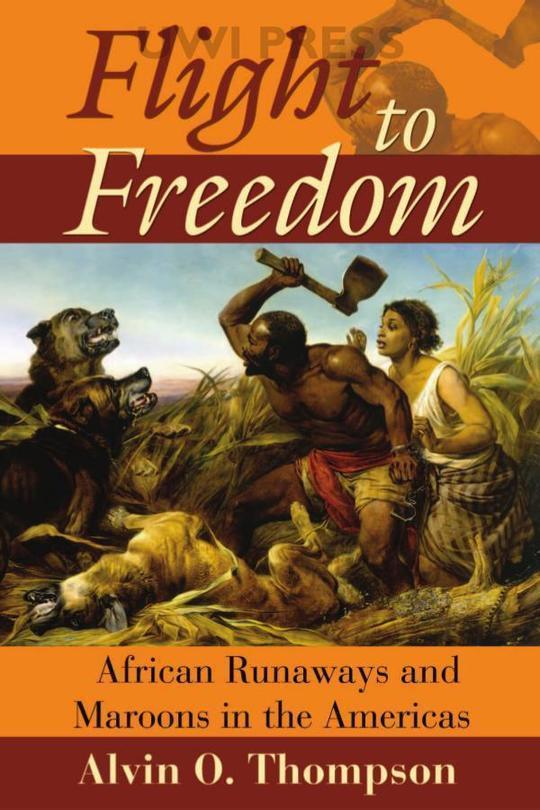 Flight to Freedom: African Runaways and Maroons in the Americas

By Alvin O Thompson
US$ 9.99
Buy eBook NowGift eBook
The publisher has enabled DRM protection, which means that you need to use the BookFusion iOS, Android or Web app to read this eBook. This eBook cannot be used outside of the BookFusion platform.
DescriptionTable of ContentsReviews
Book Description

As people of African descent in the Americas search for a usuable past, it is little surprise that they stop on the figure of the maroon as an ideal type to celebrate African American resistance to enslavement. The attraction of marronage for contemporary historiography is that the maroon can be seen in heroic terms, as a person who not only refused to accept enslavement but who also advanced a vision of society different from and often opposed to that which was advanced by slaveholders or enslaved persons. For historians looking for discourses about the place of people of African descent in the western hemisphere that escape the strictures of having to talk about black culture within the restricting confines of slavery (African American culture as emerging within slavery or as a response to slavery), marronage is a very attractive proposition. The maroon did not only defy white ideas about the proper place of Africans in America but also forged a life for himself (relatively few maroons were women) that may have been hard but which was undeniably independent. Unsurprisingly, scholars have found such people attractive counterpoints to enslaved people. The literature on marronage has consequently been increasing rapidly.

Alvin O. Thompson's synthetic work on marronage is an invaluable guide to this burgeoning literature. He seems to have read everything written about maroons in a variety of European empires in the Americas and distills what he has read wisely into a compelling narrative, based around maroons as lovers of fredom and defenders of freedom, if only for themselves rather than for black people in general. He sees remarkable similarities in the experiences of maroons over both time and space. Thompson, in comprehensive chapters on the comparative history of marronage and on how maroons organized themselves politically and economically, suggests that the common desire for freedom make maroons truly pan-American figures whose histories merge rather than diverge. In this respect, Thompson counters a literature on marronage that insists on the specificity of separate maroon communities. He favors an approach that stresses similarities based on an inner logic derived from similar experiences that transcended spatial and linguistic barriers. That logic originated not only in the necessity for maroons to isolate themselves from European domination but also from the centrality of slavery as the condition against which maroons continually measured their commitment to freedom. The pan-American approach Thompson takes to marronage supports such an interpretation. Thompson's major contribution is to provide means whereby different maroon communities can be contrasted and, most importantly, compared. The writing is fluent and succinct; the judgements are sound and generally defensible; and the wideness of Thompson's perspectives is commendable. Thompson's books is a signal achievement that scholars of both marronage and slavery will find very useful.

Where Thompson is less convincing is in his determination to see maroons entirely within a framework of resistance to enslavement. This framework gives too much agency to slaveholders as the people determining social structures. One might try and interpret marronage outside of the prism of slavery; maroons were surely more than just former enslaved people, as Thompson terms them. They created, as a host of writers canvassed by Thompson suggest, viable societies that established rules and modes of behavior that developed independently of slavery. Thompson's focus on resistance as the sole lens through which marronage can be examined limits maroon cultural creativity.